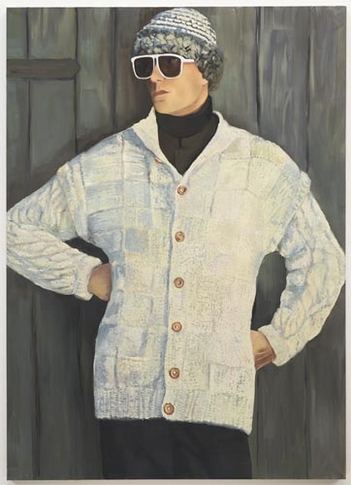 Credit: Courtesy of the artist and Metro Pictures, New York

Cardigan Jedrek is from Olowska’s “Applied Fantastic” series of paintings based on postcards featuring Polish home-knitting patterns from the 1980s. The series title refers to a term developed by Polish novelist Leopold Tyrmand (1920–1985) to describe “a dedicated enactment of a liberal fantasy despite modest means.” It underscores the way the patterns reflect a DIY approach to adapting Western style to the limitations of the communist Eastern Bloc, where shortages of basic supplies were common. The postcards that inspired these works often included directions with can-do language like “in times when there is hardly anything in stores to buy, you can create an outfit from hand-me-downs or your grandparents’ closet.” This kind of utopian punk ethic, a will to improve reality through fantasy, decisions, and self-sufficiency, is characteristic of much of Olowska’s work.