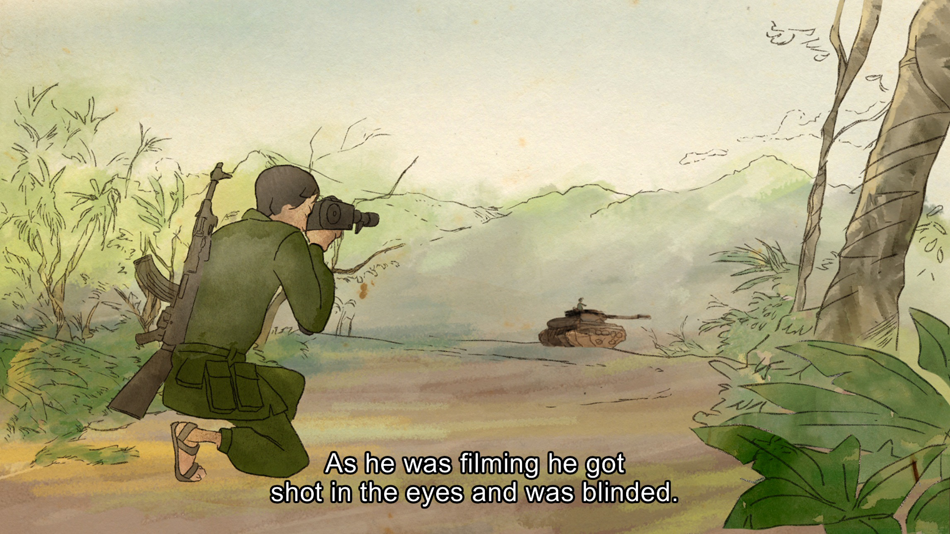 Light and Belief: Sketches of Life from the Vietnam War

Dinh Q. Lê’s project Light and Belief: Sketches of Life from the Vietnam War is composed of one hundred drawings and paintings made by Vietnamese men and women serving as artist-soldiers on the frontlines of the Vietnam War, accompanied by a documentary film consisting of interviews with the artists and brief animations of some of their drawings and paintings. This collective narrative provides an unusual, personal perspective on what is also known in Vietnam as the Kháng chiến chống Mỹ or “Resistance War Against America.”
Exhibited only once before, in Germany for Documenta 13, Light and Belief is shown here for the first time in the United States. The paintings and drawings present quick and loose reportage of a conflict as it unfolds, while others are meditations in times of repose, rendering life around the edges of war in fine pen-work and sweeping watercolors, serving almost as visual journals. Most poignant are the portraits. Resembling passport photographs or family snapshots, they are records of individual lives and were often kept in a soldier’s pocket to be passed on to family members should he or she die in combat. In Lê’s documentary, the artists speak with humor, candor, reflection, and a great deal of pride about the cultural history of their country and the power of art. Lê’s project is also a personal history, as the artist traces events he escaped as a child when his family fled Vietnam for the United States, where they eventually settled.

Co-curator Dan Byers on Light and Belief: Sketches of Life from the Vietnam War [1 of 2]

Co-curator Dan Byers on Light and Belief: Sketches of Life from the Vietnam War [2 of 2]

Co-curator Dan Byers on the artist in society

Co-curator Dan Byers on art as a mediator