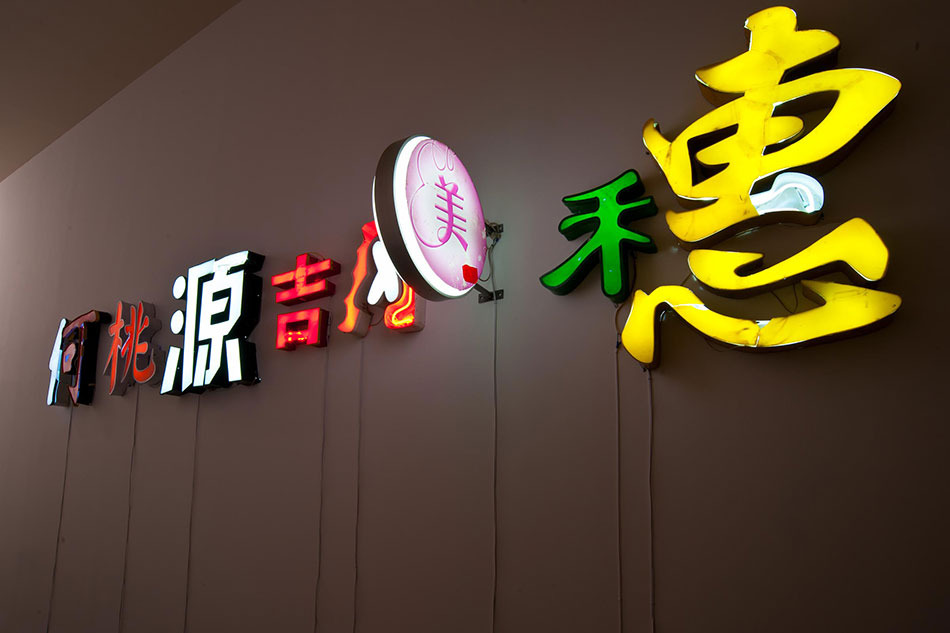 What Makes Me Understand What I Know?

Part of an emerging generation of artists born after China’s Cultural Revolution and in the midst of an enormous industrial expansion, He An started incorporating neon light-box characters—stolen from the ubiquitous signage of fast-growing cities like Shenzhen and Wuhan—into his artwork in 2000. In his ongoing project, What Makes Me Understand What I Know?, begun in 2009, two names are repeated over and over, spelled out in different configurations by combining fragments of disparate signs. One name, that of the artist’s father, He Taoyuan, consists of three characters; the other, Miho Yoshioka, the name of a favorite Japanese adult-video actress, is four characters long. What Makes Me Understand What I Know? abruptly combines references to the artist’s familial relationship with his father and his anonymous yet intimate relationship with the actress; the alienating urban spaces under hyperdevelopment in China; and memories of home from the artist’s new, adopted city of Beijing. The lighted signs evoke both the bustling thoroughfares and abandoned alleyways of contemporary megalopolises, further elucidated through projected images capturing the theft of the letters themselves. Assembled through a rebellious act of self-declaration, the works manifest the artist’s will to mark existence in this destabilizing and quickly shifting urban environment. Two more sets of signs are on view in the museum’s main lobby.

Co-curator Dan Byers on the significance of the characters that make up What Makes Me Understand What I Know?