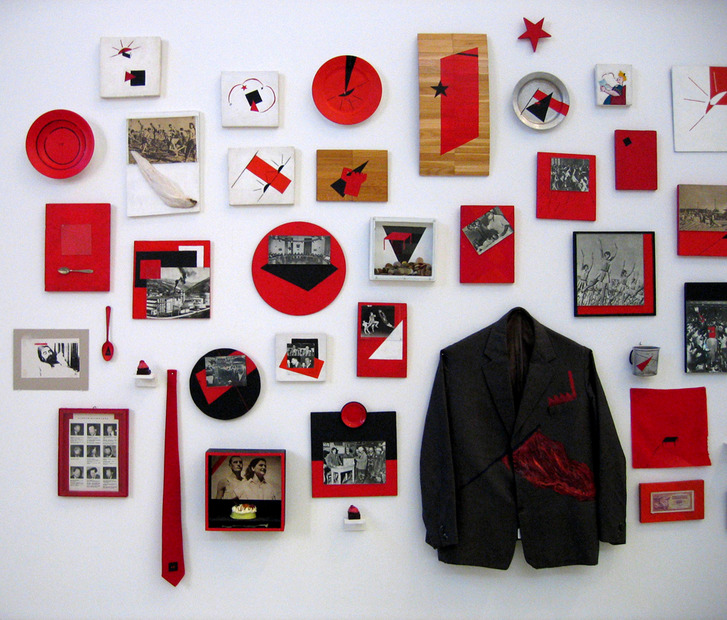 Image courtesy of the artist, Zagreb

Exploitation of the Dead

Credit: Collection of the artist

Exploitation of the Dead, a constantly rearranged cycle of 129 individual paintings, drawings, texts, found objects, and photographs, is a rich example of Stilinović’s philosophy. The artist creates an intricate montage of art history, explicitly political and religious symbolism, everyday objects, and collaged photography according to an organization that is intuitive and allusive rather than taxonomical.

According to the artist, “The exploitation of the dead refers to several things: first, to the exploitation of dead poetics of painting – Suprematism, Socialist Realism and Geometric Abstraction. Secondly, to the exploitation of dead signs; for me these signs are dead because they have lost their meaning, or the meaning is so transparent that it is in fact dead… Thirdly, signs of cross and star initially represented man, and were later used by religion and ideology for their purposes; today, and this is a personal interpretation, they have become signs in cemeteries, not dead signs but signs of the death. This could also be said for colors red and black.”

The formal and institutional context also informs the work: “These works do not appear different from the others at first and to a casual viewer they might seem basically the same… This exhibition speaks of paintings within paintings and an exhibition within exhibition…I have been involved with the questions of repetition both in my previous and current work. What, how and when do we repeat certain things? To what extend is repetition a conscious act? Is repetition the only form of learning? Repetition itself? Prayer? When does an individual learn by repetition and when does he lose his personal integrity? Is repetition a form of death? At this exhibition, signs, photographs, and colors are repeated, and the entire exhibition is a sort of repetition of the past. Dead.”