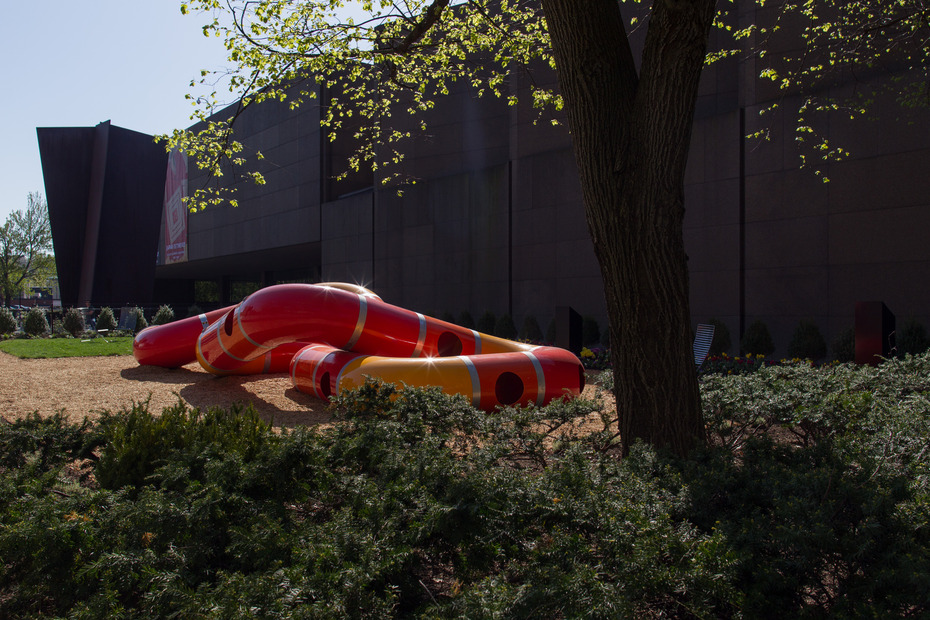 The Lozziwurm installed outside of Carnegie Museum of Art

Pittsburgh, PA...Lynn Zelevansky, The Henry Heinz II Director of Carnegie Museum of Art, announced today the late April launch of a Lozziwurm play sculpture among the trees near the museum’s main entrance at Forbes Avenue and Craig Street. The Lozziwurm is a colorful, twisting, tubular play structure designed by Swiss artist Yvan Pestalozzi in 1972; this is the first US installation of a Lozziwurm and it will be open to the public. The Lozziwurm is one of several projects leading up to the 2013 Carnegie International, which opens October 5, 2013. It reflects the International’s explicit engagement with the city of Pittsburgh, the museum’s public, and conceptions of play. “We all agreed that this exhibition would not drop on the city from out of nowhere, but would be developed in exchange with Pittsburgh, its people, and its urban fabric," said Daniel Baumann, one of the three co-curators along with Dan Byers and Tina Kukielski. This new public space—together with the apartment in Lawrenceville that is a site for informal events, the CI13 blog, and exhibition components in other parts of the city—will deepen this engagement with Pittsburgh, as it also explores play as the foundation of thinking, making, and experimentation, a key animating concept of the 2013 Carnegie International.

The museum expects to break ground in mid-February and open the play structure in late April 2013, creating a place where families can gather and where children from all backgrounds and all parts of the city can play and interact. Surprising, welcoming, and accessible to all, this newly established pocket park represents Carnegie Museum of Art's continuing commitment to families, and to exploration, and creative imagination, setting the stage for new ways of thinking about contemporary art and the museum. This commitment will be expressed in greater depth during the museum's Summer Architecture Camp at the Heinz Architectural Center, which will be set against the backdrop of The Playground Project, a richly illustrated exhibition on the history of postwar playgrounds. Children participating in the camps will have the opportunity to respond to inspiring sites from around the world, designing playgrounds of their own. The Playground Project will be on view for museum visitors from June 10 to August 23, 2013, and then October 4, 2013, to March 16, 2014.

Opening October 5, 2013, the 2013 Carnegie International could only happen in Pittsburgh. A major exhibition of international contemporary art, a playground, the museum's collection, and an engagement with the city of Pittsburgh, the International is truly international in scope and unorthodox in approach. The exhibition will include 33 artists from 19 countries—some of the most striking, contradictory, and playful voices working today—and is deeply rooted in the museum that has hosted this exhibition since 1896.

Co-curators Daniel Baumann, Dan Byers, and Tina Kukielski are expected to announce the artists in the upcoming Carnegie International in late April 2013. They will continue to host public artist talks and related events at the museum's apartment space in the Lawrenceville neighborhood of Pittsburgh, and provide a window into their thoughts and planning process on the 2013 Carnegie International blog, Pinterest, Tumblr, and other social media.

Daniel Baumann, Dan Byers, and Tina Kukielski are available for interview. Follow their exploits at the 2013 Carnegie International blog: ci13.cmoa.org.

To learn more about the 2013 Carnegie International series of apartment talks in Lawrenceville, please email gauglerj@carnegiemuseums.org.

Major support for the 2013 Carnegie International has been provided by the A. W. Mellon Charitable and Educational Fund, The Fine Foundation, the Jill and Peter Kraus Endowment for Contemporary Art, and The Henry L. Hillman Fund. Additional major support has been provided by The Friends of the 2013 Carnegie International, which is co-chaired by Jill and Peter Kraus, Sheila and Milt Fine, and Maja Oeri and Hans Bodenmann.

The Lozziwurm playground was made possible by a generous gift from Maja Oeri and Hans Bodenmann.