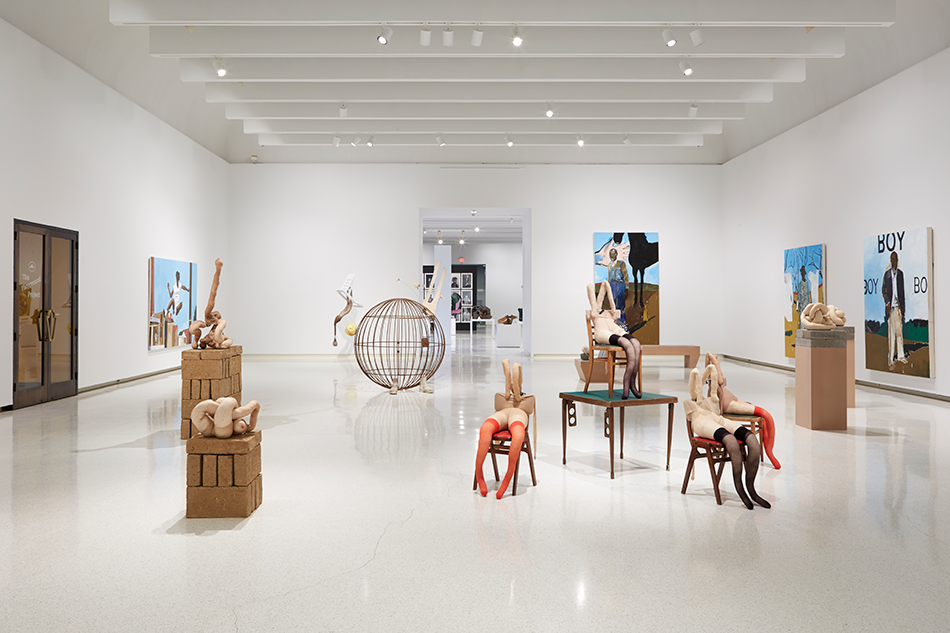 New York Times
"The 2013 Carnegie International is a welcome shock to the system of one of the art world’s more entrenched rituals. This lean, seemingly modest, thought-out exhibition takes the big global survey of contemporary art off steroids....With only 35 artists and collectives from 19 countries, the latest Carnegie says no to the visual overload and indigestible sprawl frequent to these exhibitions. It also avoids the looming, big-budget showstoppers...for which they are known....Did I mention that half of the artists are women?"—From "Global Extravaganza, but on a Human Scale," Roberta Smith, Oct. 10, 2013 | Read the full review.

New Yorker
"The strikingly thoughtful new edition of the venerable Carnegie International, an exhibition staged every few years at the Carnegie Art Museum, in Pittsburgh, starts outdoors, with two smart bangs. The first dramatizes a change in public art that has been fostered by big biennial-type exhibitions....It involves 'Tip,' an immense jungle of boards wrapped with scraps of wire mesh, slathered with cement and paint, and festooned with strips of brightly colored cloth, by the British sculptor Phyllida Barlow. The work swarms a hundred and thirty-one feet across a plaza, almost to the museum’s front doors, passing within inches of 'Carnegie,' a thirty-nine-foot-high tower of four inward-leaning, rust-surfaced steel slabs, which was created by Richard Serra for the 1985 International, and then acquired by the museum. 'Carnegie,' by my lights, is great original art, while Barlow’s 'Tip' is a pastiche of installational foofaraw. But Barlow’s up-to-date caprice easily mortifies Serra’s canonical dignity, as if dragging a samurai into a pillow fight....If you want to interpret the Barlow as feminist versus the Serra as macho, that’s more than allowed. But you can as readily see the juxtaposition, like much else in the exhibition, as a self-aware specimen of festivalist cheek. As I said, this show is thoughtful."—From "Play Time," Peter Schjeldahl, Oct. 21, 2013 | Read the full review.

New York Observer
"The more time I spent this past weekend at Pittsburgh’s Carnegie International, the major survey of contemporary art that the Carnegie Museum of Art started in 1896 and now organizes every four or five years, the more I envied the people of the Steel City, who get to have it at their doorstep for the next five months. This year’s edition is generally superb: focused, considered and perfectly scaled."—From "A Playground in Pittsburgh: The 2013 Carnegie International Is a Quiet Triumph," Andrew Russeth, Oct. 8, 2013 | Read the full review.

Art in America
“What do the curators of the 2013 Carnegie International want you to take away from their museum-wide exhibition? The key word is 'play.' The museum as a playground, games as critique—such analogies bubbled up in the galleries, in the catalogue and in remarks by museum personnel at the latest incarnation of this exhibition, founded 117 years ago…”—From "Playful Politics at the 2013 Carnegie International," Jason Foumberg, Oct. 9, 2013  | Read the full review.

Artforum
"Eagerly anticipated, the 2013 Carnegie International is a down-to-earth, homegrown affair. Without a title, a theme, or any kind of tagline, it’s a special show that doesn’t put on any special airs, which is no small feat given the International’s status as the oldest, grandest, most august exhibition of contemporary art in the US."—From "Kid ‘n’ Play," Oct. 8, 2013 | Read the full review.

Vogue
"These days, of course, the International has come a long way from when artworks were delivered to the museum by horse-drawn carriage. But under the direction of 2013 curators Daniel Baumann, Dan Byers, and Tina Kukielski, who traveled everywhere from Beirut to Beijing in search of this year’s 35 participating artists, the show continues its progressive tradition of introducing new names to an American audience while referring to the Carnegie’s 120-year history and the city in which it is rooted."—From "New World Order: The 56th Carnegie International Opens in Pittsburgh," Julie Bramowitz, Oct. 3, 2013 | Read the full review.

Canadian Art
"This is a deeply humanist affair. Baumann, Kukielski and Byers have spared no effort in putting themselves and their exhibition into the community. But they’ve also played with the status of the museum itself, opening the doors (and most other spaces) of the institution to invite a real and meaningful engagement with the space and its international exhibition. It is a show that does not pivot on privilege and prestige, but draws its rationale from a thoughtful activation of the common ground of everyday social life—and, in turn, everyday political life, too."—From "Carnegie International Favours Play Over Pomp," Bryne McLaughlin, Dec. 9, 2013 | Read the full review

Saw pics of installation of totally insane piece @cmoa - hadn't actually been by until driving this morning. almost stopped in traffic. GO!

@cmoa This is by far the coolest art exhibit I've ever seen! #carnegieinternational #Pittsburgh pic.twitter.com/0ugetjxINm

At the @cmoa International with my friend Lola and it's amazing already, 3 pieces in.

A few weeks until I can make it to @cmoa, but the #CarnegieInternational appears to be engaging directly w/ Pittsburgh as a cityóremarkable.

Brilliant intervention in the hall of sculpture @cmoa by Nicole Eisenman #ci13 pic.twitter.com/613ZEo8tGq

If you are in Pittsburgh don't miss the terrific exhibition about utopian/art/DIY playgrounds at the @cmoa pic.twitter.com/xLeR83ztsN

#CarnegieInternational is a FANTASTIC experience. If ur in #Pittsburgh in the next few months, its a must-see! @cmoa http://t.co/5heKE9D3La

I visited the Braddock Carnegie Library for the Carnegie International Exhibit! It was awesome http://t.co/KwX90DM7ut @CLP_tweets @cmoa

Getting lost inside @cmoa collection galleries, loving the notes about works in past CI's. A reminder the collection is the museum!

I loved so much about @cmoa's #carnegieinternational, but The Playground Project was my favorite. pic.twitter.com/YpBwk570P0

Spot on, @cmoa, the International "...exposes the confusing beauty of the everyday." #ci13

Thoroughly enjoyed #CI13 @cmoa There's a lot of meat here to chew on for later. Make your way to Pittsburgh to see this if you can!

@cmoa @AndrwGoldstein Yesss, Carnegie International is just so whimsical and fun! It's art that is approachable yet weighty!

Another view. Notable, wonderful: This and that last Fecteau I shared are both in @cmoa's collex: pic.twitter.com/mwl8lEcxxT

Went to the @cmoa international today. Blown away. Even better than last time.

I highly recommend that everybody go see the Carnegie International at @cmoa immediately.

Go to the @cmoa and see the international before you talk to me, peace.

Fun photo session at #CMoA this afternoon & gotta admit, I cannot wait to come back, lock eyes and slow dance with #CarnegieInternational

@SportsnWhatnot it is sooo my kind of art. We live in a great city with a great museum @cmoa

"Met way best cool people @ Culture Club ! Art & people merged/converged in the best of ways !! Met an author writing about Mexican Drug Cartels [above installation photo] She even knew what caliber the guns were !!! Only in Pittsburgh !!" -- Fred P Seifried, via Facebook

"This International is all about the pieces taking you! Talk to your fellow onlookers & it will be LOTS of FUN !!" -- Fred P Seifried, via Facebook

"I was there for the kickoff today--really wonderful feeling!" -- Dana Friis-Hansen, via Facebook

"My introduction to artists from all over the world was in these exhibits when I was a child..." -- Julianne Biehl, via Facebook

"I was fortunate enough to be part of this opening today. It was an incredible experience. Thank you for bringing this to us!" -- Cynthia Lynn Vickers, via Facebook